Don’t you just love weight loss articles that start with pictures of sweets?

Since I started on Lexapro a year and a half ago and added Wellbutrin six months ago I’ve put on about 20 pounds. Thank goodness I’m an aspiring powerlifter and I still use my Fitbit or who knows how much more I would have gained.

I went to the doctor a few months (and pounds) ago and for the first time in my life I was told that I was a few of pounds overweight (according to the admittedly bogus BMI chart). I couldn’t believe my ears!

But I shouldn’t have been surprised.

This past winter I was trying to zip up my favorite black sheath and I guess I was too much woman for it. The zipper tore away from the seam of the dress and I found myself trapped. The zipper wouldn’t go up or down. I was stuck (kind of like this girl). I had to wake Fred to cut me free!

Weight gain on antidepressants is frustratingly common. Many people don’t understand why they’re gaining weight on their antidepressants and can’t seem to lose it. They wonder if their metabolism has slowed or something funky is going on. I can’t speak for them. Everyone is different.

But honestly, I actually know exactly why I’ve gained weight.

Trying to “eat right” and cut calories led to slightly disordered eating as I cycled between restriction and binging on foods high in both sugar AND fat (soft-baked cookies!!). It felt impossible to cut back a bit on calories for long enough to see changes. I felt out of control.

Even though I’ve always been a cookie monster, I used to lose my appetite whenever I was stressed. Stress eating just wasn’t my M.O. Since I was really stressed in college, I was also really thin.

It was only over the last 5 years that I started stress eating and binging.

Cutting back on sugar isn’t exactly easy for anyone — especially not for a true cookie monster. That said, I have quit sugar for months at a time twice before I got on meds to drop pounds gained during stressful periods. Yes, it was hard, but it never felt IMPOSSIBLE.

When the sugar cravings first started it would go like this:

I would come home from work with a migraine or tension headache dying for silence and a cookie. I felt so tense and couldn’t think of anything but where I would get my sugar and fat fix. I would put my clothes back on no matter how cold, snowy or rainy and walk to Subway and purchase cookies or drive to CVS to buy a bag of snack size chocolates of some kind, come home and scarf them down.

Within minutes the tension would start to release. 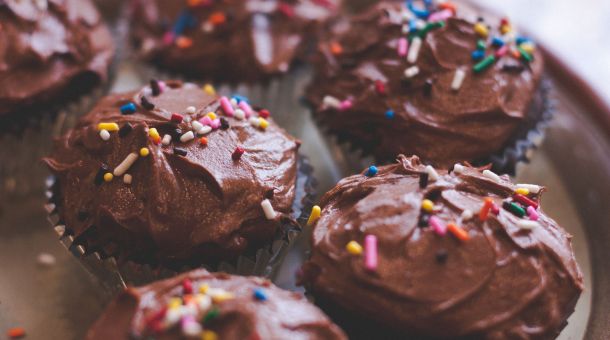 I didn’t even know why I was eating, but I felt powerless to control it. I felt like it wasn’t up for discussion. It was never just a cookie or two unless that was all I bought. It was usually an entire package of cookies.

I have often read advice that cravings typically pass in a few minutes so if you just don’t keep sweet and fatty treats in the house the craving will pass before you have the chance to do something about.

If you’re on antidepressants or you’re depressed that’s likely not been true for you. My friends know that if they don’t keep cookies in their place when I come to visit we will probably end up taking a trip to the store at odd hours.

I needed the sugar immediately to end the discomfort. Simple as that. I tried increasing my caloric output with HIIT and steady state cardio to compensate and only ended up increasing my appetite. Every attempt to change so far has ended with mini-binges keeping the cycle going while my weight keeps creeping up.

After trying so many different things, I’m finally going to try a method I came across about a year ago called The Serotonin Power Diet (SPD). At the time I didn’t take it seriously. I didn’t want to buy the book (still resisting) and there just isn’t much written it.

Honestly, I’m so fed up with all of these different diets and so called “lifestyles” — paleo, pescetarian, plant-based, gluten free, sugar free, carb restricted, plain old calorie counting — that I’m willing to give it a try.

SPD goes against everything I thought was true. It encourages a strategically increased consumption of carbs to help your brain out with satiating and mood-boosting serotonin. I just started it this week, but will follow up with more details if it works.

In the meantime, remember that it’s not just you.

I feel that my treatment plan, including my medication, has saved me life. I don’t regret my decision to take antidepressants, but the side effects are real.

Here’s hoping that there’s a way to not feel totally powerless around carbs forever!

One thought on “Antidepressant Weight Gain”

Welcome to INFJ.D where I blog about mental and physical health and the incredibly adaptive power of the human brain - written with the introvert and highly sensitive person in mind.